The 2018 ski season is certainly turning out to be very different to last year! As the British half term holidays are about to kick off, here’s a summary of snow conditions for those of you heading to the off piste and ski touring Mecca that is Chamonix. 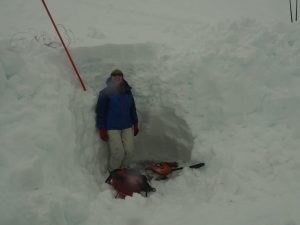 It’s been a bumper year for snowfall. Snowfall has equalled records set in the 70’s which for many lucky folk means the best in living memory. Here’s a shot showing snow depth at 1800m in Saint Gervais in late January.

Set against that, January was very warm with average temperatures in France 3ºC above normal. The typical pattern has been snow and wind followed by warmth, which has made avalanche activity quite eventful to say the least.

Our first proper snow arrived in mid November and by mid December, the skiing in the valley was getting very good. Here’s Susie Burt caning it in Le Tour on the 13th.  Of course, good skiing means lots of skiers means lots of people pushing it, sometimes a bit too much. There was an exciting avalanche incident in Courmayeur,  with no fatalities but lost skis and a large laundry bill, one suspects.

You can read more about this in the excellent website run by Alain Duclos, data-avalanche.org 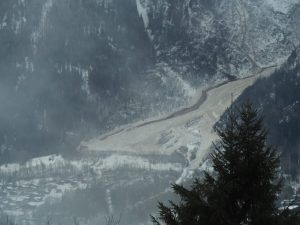 Over Christmas it went warm and stable, with the freezing level rising to 3000m and at New Year, despite a brief top up, all the trees were black up to 2000m.

Massive snowfall and winds in early January led to much of the Alps being subjected to category 5, the highest level of avalanche risk. Massive slides rode over the avalanche barriers in the opposite side of the Chamonix valley from my home and damaged a few buildings. Luckily the barriers did their job and nobody was killed. 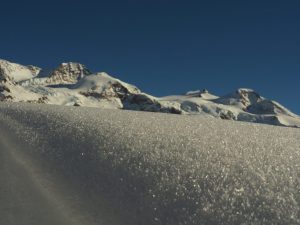 Things then settled down remarkably fast and some excellent skiing was enjoyed for a week with cold clear weather and tremendous powder. With the good weather however, frosty surface hoar formed at many levels. This caused mountain professionals and avalanche forecasters to predict another bout of instability with the next snowfall. On cue, another cycle of snow and wind was followed by re-warming and once again we saw widespread cat 5 conditions in many areas. 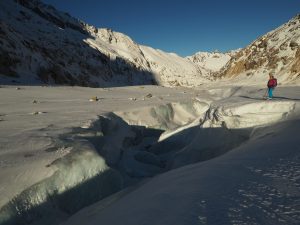 Luckily all the warm weather means that snow is sticking high up and so snow coverage in Chamonix’s world famous Vallée Blanche is looking good, though of course it’s still only early season. Wind has moved snow around a great deal and while coverage looks good, ice and therefore crevasses are lurking not far from the surface in some surprising areas. A colleague of mine pulled someone out of a slot in mid January. Caution is advised! 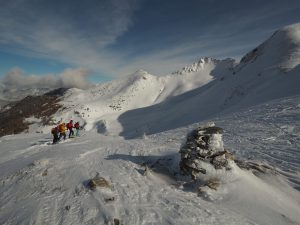 Tour on the 1st February showing the variability of cover, with some distinctly Scottish looking snow formations ( though unScottish visibility – ha ha! ). In the last 2 days, the föhn has been howling from the south and east, settling the snowpack low down but forming slab high up. The weather is certainly keeping us on our toes.

Overall, things are looking really very good for the off piste skiing in the next month, and then the touring season of March and April. Happy sliding to you all, and keep an eye on the avalanche and weather forecasts.