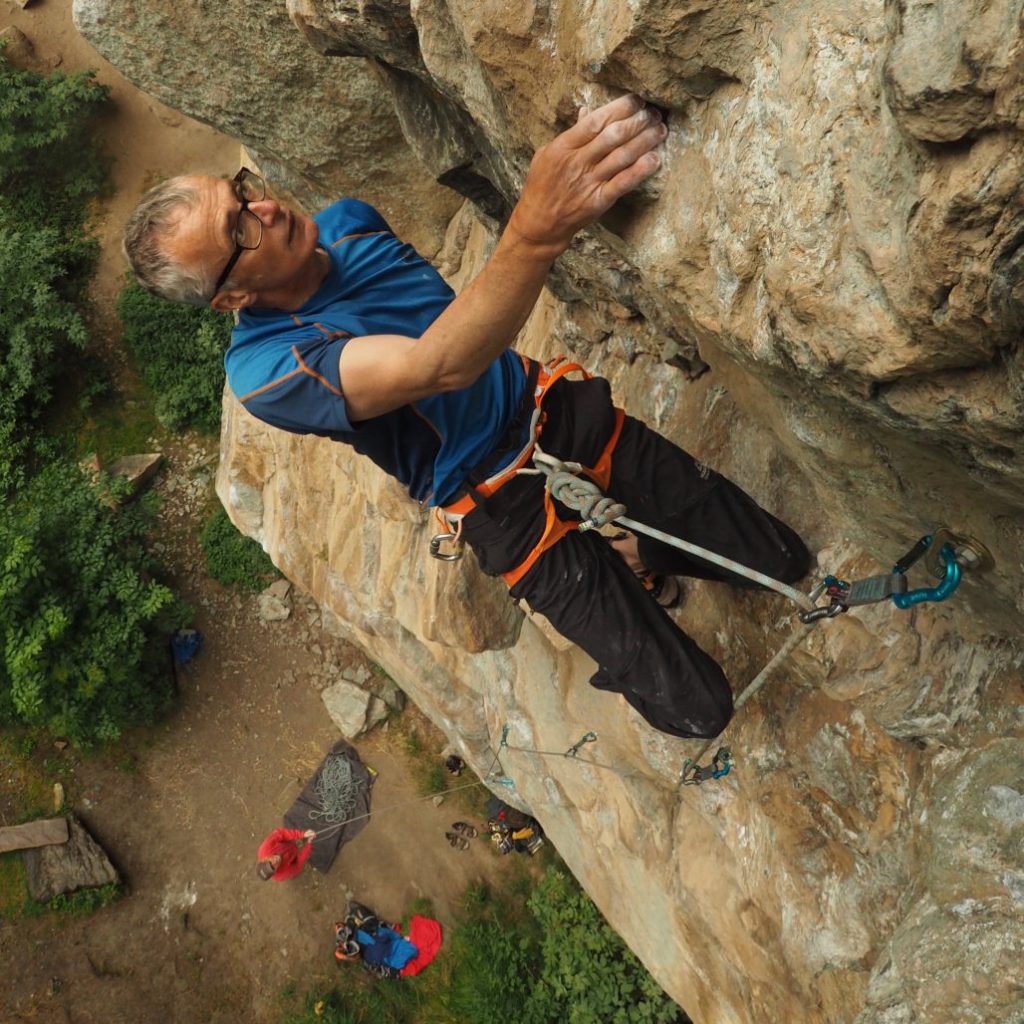 This is not an obituary. Martin’s mountaineering achievements are well documented, not least by the man himself in that witty and incisive manner that characterised both his writing and his demeanour. The following serves merely to illustrate his influence on my career as a mountain guide.

In the late 90’s when I was approaching the alpine section of the British Mountain Guides’ training scheme, the given wisdom to accumulating those precious “quality mountain days” for one’s logbook was simple and short: go work for Martin. Asking around, it seemed as though everyone had been to Evolène at some stage in their career. I hardly knew where Evolène was (having misspent much of my alpine youth in Chamonix), and all I knew of Martin was that he’d written a book about Scottish winter mountaineering and had done all the alpine 4000’ers.

So it was with some curiosity that I rocked up to the chalet in Evolène in July 2000 for my first alpine work. The fact that I worked for him almost every summer since and have continued to do so with Graham and Janine Frost, who bought the alpine part of his successful business a few years ago, speaks for itself. Guiding for Martin Moran is the kind of work I enjoy.

Essentially, the way it works is that the guide gets to do interesting and varied work, going wherever it takes to get the best climbing for the client, with the clients returning to a cosy chalet and the guides to a nearby campsite. Rather than necessarily being strapped to the 4000m list, technical terrain was sought after. If you returned to the chalet with tales of it being a little bit more difficult than anticipated, or perhaps a few hours longer, Martin was plainly delighted. His enthusiasm for the Valais and the Oberland, wilder than nearby Chamonix, was clear. If you came up with a cunning plan for something off the beaten track, his eyes would light up, and then he’d make a couple of suggestions or give you some beta, having clearly been there a few years ago. One of my finest achievements in guiding was to return from Besso in the Val d’Anniviers and hear him say “I must get there some time”. What? I’ve climbed something Martin hasn’t done in the Valais???” BOOM – as the young people say these days.

Like many guides, Martin was  definitely competitive and always strove to keep up with his increasingly younger aspirant guides. He nearly always could but, on one legendary occasion, he was in a hut with two young aspi’s, one of whom was an insanely fit rock climber. This young man (let’s call him Matt for the purposes of the story) started a pull up competition on the hut stairs. Martin had to join in (of course) and ended up almost passing out from the effort. A veritable Peter Pan, his youthful appearance and enthusiasm for adventure in general and technical climbing in particular shone through him. As a result he attracted guides and clients with similar outlooks, and some of my longest standing clients I owe to Martin. I’ve guided in some far-flung places, from ice climbing in Arctic Norway to exploratory mountaineering in the hidden valleys of the Garwhal, and none of that would have happened without Martin’s influence.

Running a business in Switzerland was never going to be easy, with its high living costs, so the Moran model was to house the clients in a chalet with much of the food and the cook brought out from the UK. Consequently it felt like a home from home, relaxing in the front room with afternoon cakes after days out on the hill. But just one cake per guide per day – there’s the budget to consider. I had frank exchanges of views with Martin (whose financial prudence and thrift as a qualified accountant were legendary) on a couple of occasions when I thought the best climbing involved spending a bit more money. On both occasions I got my way, as for him the priority was safety and quality of experience for the clients. Just remember – no more than one cake.

A good way to save money was to employ British guides rather than local Swiss ones, and have the keen young tiger guides (and a few older ones too!) stay on a nearby campsite. The community feel in the Camping Les Hauderes was very special, harking back to the days of Snell’s field in Chamonix in the 80’s, but with us all trying to be grown up, sensible and professional. Some guides had permanent pitches there with huge dome tents. As the dusk fell, we cooked big communal dinners with unreasonable quantities of beer and wine, earning odd looks from the Dutch families that seemed to take up most of the rest of the site. The esprit de corps of the training scheme, already very strong, was reinforced over evenings dissecting the day’s performance and then pickling it in alcohol (though Martin himself wisely stayed in a chalet in the nearby village and was allegedly quite abstemious, though I did share a couple of glasses of red wine with him as he relaxed in his later years).

Martin’s Deputy Dawg at the time, the sergeant major to Martin’s colonel, was the legendary Chris Dale. It’s a testament to Martin’s nature that these two got on so well – the straight sensible accountant Moran with a gleam in his eye and the hugely muscled ginger cross-dressing potty-mouthed Dale. How did they do it? I think it’s because both recognised in each other a passion for climbing, especially in unknown places, and getting the most out of their clients, sometimes far far more than they expected.

That search for the unknown took Martin to India, where he developed a reputation as the expert in the Garwhal and in particular the mountains around Nanda Devi. His experience and expertise in this fantastic mountain range were arguably unrivalled. I was lucky enough to lead three expeditions in the Garwhal for him. Meticulously organised with the help of Mr CS Pandey in Delhi, these trips were all adventures of a special kind. Without a doubt the highlight of these was an expedition to Adi Kailash,a mountain deep within the Inner Line on the borders of Nepal and Tibet. Basic maps were supported with detailed beta from Martin in this remote area that saw just a few Indian tourists and no other Western climbing teams.  With a team of strong and experienced clients supported by powerful local staff, we pulled off this first ascent by a whisker, getting down just before the winter snows arrived and then trekked back out in character building bad weather. It’s just the sort of experience that Martin would have been looking for, I like to think.

He carried on searching for that adventure after selling the alpine business, employing ever younger guides, the only ones who could keep up with him. His life, and those of his clients and Indian personnel, ended in that same search. My heart goes out to their families and above all Joy, Alex and Hazel.

He was a wise, kind and gentle man with phenomenal enthusiasm and drive. He was always a delight to spend time with, whether on the hill, in the hut or in the chalet. He had a profound influence on my life as a mountain guide, and I will miss him greatly.