Third weekend in November every year is when the climbing tribe descends on a small town in the northwest of England for its annual gathering. For over twenty years it’s been my privilege to head up  the presenter team for Kendal Mountain Festival. It’s the biggest and (in my totally unbiased opinion) the best Festival of its kind in the world, and is one of the highlights of my year.

In 2020, we were forced to go totally online and the team did an amazing job to keep the stoke going. We’re back this year with a hybrid event – for those people who feel uncomfortable gathering in large groups, we have an on line player, and you can access all the films there both during and after the Festival.

But you really can’t beat live events for emotion, feedback and the unique  buzz of Kendal, so I’m looking forward to a packed programme this weekend. I kick off on Friday morning with a film programme, Outside Thinkers. There’s some challenging stuff there, very much reflecting my background as a climber – non-conformist, rebellious, doing things in a different way, just because.

Then on Friday evening, I start with a very special event – a tribute to Doug Scott. 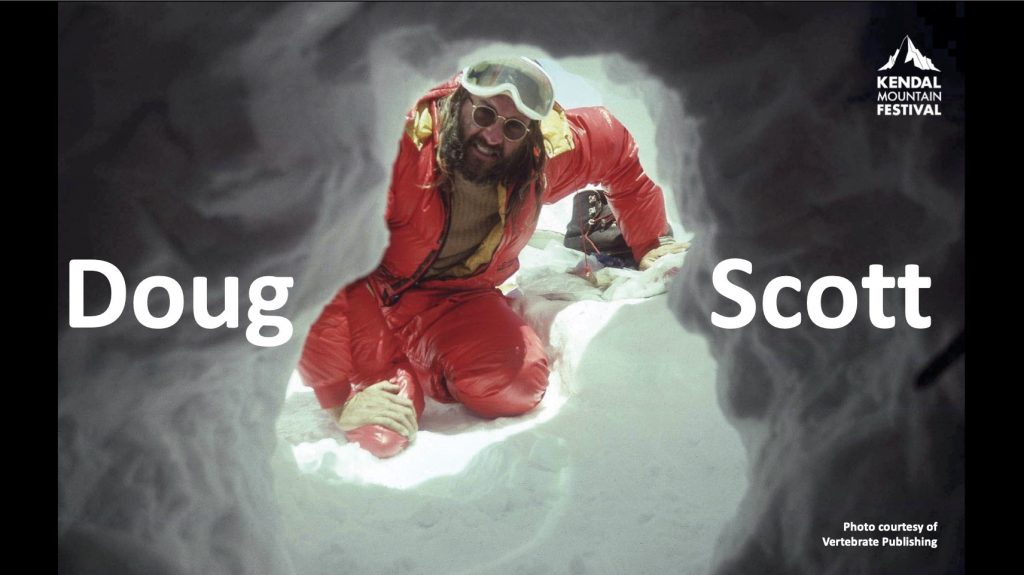 I’ll be on stage with Guy Lee, Tut Braithwaite, Andy Parkin, Victor Saunders and Trish Scott, plus we’ll have virtual appearances from Festival patron Chris Bonington and total legend Reinhold Messner. It’s going to be very special, one of those one-off events where “you should have been there”. And on top of that it’s  free and we’ll be raising money for Community Action Nepal, just as Doug would’ve wanted. Be there.

Later that evening I’ll be introducing a great feature film, Swissway to Heaven.
I saw this at the Chamonix Film Festival back in June. For any one who likes technical rock in a mountain environment, this is a must-see.

On Saturday , I’m fronting the Mountain 2 film session.
This has some great content, especially Not Alone from Heather Mosher.
If ever you think being a mountain guide is like being on a climbing holiday every day of your working life, watch this film. The hidden costs are fully exposed and on display. And there’s some great climbing from a very talented woman and a happy ending too.

On Saturday evening I’ll be at the Awards – always my favourite event because there’s so much unknown territory involved. We don’t even script it till a couple of days before (one we know who the winners are), and then the reaction of the winners and the audience is a delight. Seeing Al Lee with Jesse and Molly Dufton take Grand Prize in 2019 for Climbing Blind was one of those very special moments…

On Sunday I’ll be recovering from the post Awards party and then presenting the Mountain Session, a collection of live speakers from a wide variety of mountaineers, all with their special tales of challenge high up where the air is thin. Uisdean Hawthorn, winner of a Piolet d’Or for his new route on Mount Robson, will be followed by an interview with my professional colleague Caroline George talking about the 100% Women Peak Challenge which saw more than 700 female mountaineers from over 20 countries climb all 48 of Switzerland’s 4,000m peaks. Next up, I’ll chat with Nick Read of Pride Expeditions. He encourages LGBT people to climb mountains in countries where gay rights are not equal to others. And we finish with another Piolet d’Or winner – all the way from California, Graham Zimmerman will talk about his hardcore alpine style ascent of Link Sar, the effect of climate change on the mountains, and much more besides. It promises to be a really stimulating and challenging session.

And by then I’ll be ready for a rest , but not before  the after party with the volunteers and presenters who make the fabulous team that keep the Festival going every year. 2021 will be my last Kendal. It’s been a privilege and a pleasure working alongside this dedicated and enthusiastic bunch for over twenty years. It’s time to move on, leave the stage clear for new people. In November 2022, I’ll be watching penguins in the Antarctic , but I’ll raise a glass to this fabulous event and the people that make it happen.