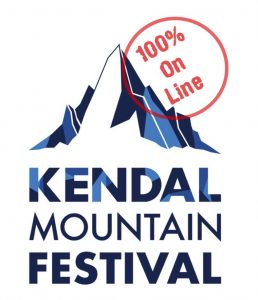 Kendal Mountain Festival 2020 was always going to be special. It’s 40 years since the first ever Kendal, when Brian Hall, John Porter and Jim Curran had the idea to show a few films in a hall and invite their mates round. It’s probably 20 years since Brian and John asked me to coordinate the presenting team, and since then the Festival has become an integral part of my year. I’ve met some great folk, learned a stack and had some brilliant times.

But from March onwards, it quickly became obvious that Kendal 2020 was going to be very very different, like so many other aspects of our lives. Even up till September, I was hoping to be there in person and be part of the hub, crouched over a laptop for 4 days in a small office in the backstreets of the Auld Grey Town. But it was not to be – the second wave put paid to that plan, with the whole Festival going on line and lockdown in France and quarantine in the UK effectively putting the possibility of my usual visit out of reach.

But, as well as being incredibly destructive and unsettling, the pandemic has opened up new opportunities. In the past, one “complaint” (if you can call it that), is that Kendal offered so much choice that it was impossible to see it all in just 3 days. There would always be something where people would meet in the bar and say “WHAT??? You didn’t see X ??? Oh mate, you really should have been there” For me, this is the first year where I’ll be able to see all the action – films, live events, the works. And with a full Festival Pass it’s all available on catch up until the end of the year. Perfect for the lockdown period in which we find ourselves.

KMF 2020 on line from Andy Perkins on Vimeo.

The programme, as always, is MASSIVE. The usual high standard of curated film collections, specialist sessions for every taste and a wide range of presentations, some pre-recorded and other streaming live. After some thought, I decided to put together a few picks based on my preferred activities: climbing and skiing, and then put in a few wild cards at the end to open up new possibilities, as often happens at Kendal.

As always, climbing films form the core of the Festival for me and 2020 is no exception.
The two dedicated sessions, Climb 1 and Climb 2 have got some great looking prospects. In Climb 1, I’m especially looking forward to seeing Lock Down Rock Up and A Bridge Too Far. In Climb 2, Concepcion stands out for me. Hazel Findlay is a real torch bearer of a climber, bold and strong, and a battle with a 230 foot splitter sounds like a barrel of laughs to me…
Sticking with Hazel , the real stand out film for me to watch has to be Pretty Strong. Watch the trailer, and see how hard these women are trying. Inspirational.

On the live sessions, the Patagonia Rock Session has got to be on the list, Pete Whittaker fresh from a prize at Banff and Emma Twyford (first British woman to climb 9a) joined by Robbie Phillips and paraclimber Abbie Robinson.

In the burgeoning Literature Festival, I’m doing my usual intro to the Boardman Tasker Award, and while perusing the shortlisted authors, Slatehead by Peter Goulding caught my eye. Slate forms a part of my make up as a climber, and I’ve great memories of some very exciting adventures on this esoteric medium. Peter is doing a special session on Sunday 22nd (by which time we’ll know if he’s won the BT or not) and I’ll be there, hanging on matchstick edges of North Wales’ finest.

Standard KMF programming in previous years has always meant that the specialist Snow night always clashed with the Awards ceremony. I normally have a key role in the Awards, acting as stage manager and coordinator. But this year I can finally get to see Snow Night and it looks like a great line up. I’m especially looking forward to seeing Katie Burrell and Colleen Gentemann presenting their film “The Coach”. If their previous award winning film Dream Job is anything to go by, it’ll be awesome (and possibly a bit risqué).

The Snow film session looks great and, as a standalone film, the first ski descent of the world’s second highest mountain has got to be a “must watch”: K2 – Impossible Descent.

The film collection in Ride 1 looks ace with a mix of skateboarding , skiing and surfing.

Becoming A Guide: I saw extracts of this filming on the web earlier this year, and this promises to be thought provoking

Outside Thinkers: the brainchild of Kendal’s artistic director Claire Carter, this programme always gets you thinking. “Let’s Roll” and “Hamama and Caluna” already pique my interest with cheese rolling in Gloucestershire juxtaposed with refugees crossing the Swiss Alps at night. Sticking with the theme of refugees, another good standalone film is going to be “Ghiaccio – Sweeping Lives“. I know the part of the Alps where these refugees often make attempts to cross in winter. Worth pondering if you think your life with Covid and Brexit is tough…

Finally, I’ll be glued to the two events which are a regular part of my Festival:
The Boardman Tasker, where I’ve got a cameo role, topping and tailing the erudite and inquisitive Steve Venables as he interviews the shortlisted authors
And of course the Awards Ceremony itself, hosted by the inimitable Keme Nzerem. I’ve had the good fortune to work with Keme on this event over the last few years, and he epitomises what the Festival means to me – creativity and enthusiasm to match. I’ll miss sinking a beer or two with him and the rest of the awesome people who come together for a few days every November: audiences, film makers, presenters, volunteers, friends and strangers who make up this cultural mix that is so very special.

So get the Kendal vibe going: get together with your mates on line, sort out a watch list, compare notes and crack open some beers, just like you would do normally, and we’ll see you all in 2021.